It seems like the Idaho native, born in 1900, artist James Castle found his perfect “biographer” in the playwright Charles Mee. Both of them dissect and create objects of everyday live and various texts of human civilization, respectively. So it seems fitting that Soot and Spit, a musical about an artist who created nearly 20,000 handmade books, drawings, and constructions out of paper, is also in a form of an assemblage. 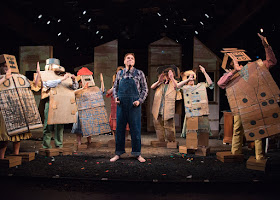 JW Guido and ensemble of Soot and Spit, photo by Nina Wurtzel

The collage structure of the text is backed up with the multiplicity of design elements coming together in a tapestry rich and thick in texture. The world premiere of Soot and Spit, produced by Our Voices Theater, combines bluegrass music, dance, video projections, puppetry, cardboard costumes and more.

The cast of twelve, directed by Kim Weild, carefully lead us through the creative process of the artist who worked not for money or for fame, but because he just had to do it. Born profoundly deaf, James Castle never learned to read, write, sign or speak. His art was his means of communication and expressing himself. Instead of slipping into familiar melodramatizing of the lives of “less fortunate”, Mee presents a view from an artist’s perspective, giving us a taste of a completely different theatre.

JW Guido, a deaf actor and an artistic director of New York Deaf Theater, brings a raw intensity and an extreme likability to the Castle’s character. We are given a chance to see the artist at work at his “studio” in his parents’ ice house, filled with stacks of newspapers, cardboard packaging and other “supplies”. The artful and meticulous scenic design by Matthew Imhoff almost places us within the action inside Castle’s works.

To make ink for his drawings, Castle mixed soot from the gas stove with his saliva, which gave the name to the musical. The work in progress and actual drawings by James Castle are projected on the five panels of the set. Media design by Boyd Branch also includes archival pictures and footage, often missed because of the overabundance of other visual elements and the small size of the screening area.

Props are vital to Soot and Spit and Leontine Greenberg did an impressive job, some of which you can see in the foyer of the New Ohio Theater as you enter. A miniature exhibit of replicas of the artist’s tools and works gives the audience a closer look and opportunity of a more intimate connection to the character.

The cardboard figures made out of scrap paper come to life in a folk duet “Here I am in Love Again”, by Robert Ariza and Estelle Bajou. As the actors sing, accompanying themselves on guitar and violin, the artist is moving two paper dolls around the table, dictating the moves of their live doubles. The Morton Girl scene, where the character from the salt packaging charmingly and obnoxiously convinces Castle to draw her, follows the parade of foods and domestic products mascots, all inspirations for the Castle’s drawings.

But not all of Soot and Spit is idyllic country life and songs and monologues of Castle’s creations. There is a disturbance brought to the story by The Woman in Black (Alida Rose Delaney), a muse or a dark angel, signing and dancing throughout the show. In the fragmented world seen through the artist’s perspective, it is impossible to be certain who is in front of us. The Morton Girl is more familiar and hence dear to us than a presumed “mother figure” or potential “love interest”. Through finding familiar in the ordinary, we strangely manage to find a connection to this estranged outsider artist. But the urge to be heard is only successful if it meets an equally strong urge to listen.

Soot and Spit, if not putting us inside James Castle head, makes a successful attempt of recreating the world through the eyes of the “other”. Instead of appropriating  the voice of the voiceless, the musical celebrates our differences in the ways we perceive the world and it does it in a very loving and joyful way.
__________
Soot and Spit runs at the New Ohio Theatre, 154 Christopher street, through June 17th. The running time is 90 minutes with no intermissions. Performances are Wednesdays - Saturdays at 7:30pm with an added show on Sun 5/28 at 5pm. ASL interpreted performances Thu 6/8 at 7:30pm and Sat 6/10 at 2pm. Autism-friendly performance Sat 6/17 at 2pm. Tickets are $25 and are available and can be purchased at NewOhioTheatre.org or by calling 212-352- 3101.